The benefits of having cattle guards on your property drastically outweighed the one-time burden of installation. How do you choose what design would be best for your operation? It commonly boils down to choosing between the style of the top pipe:  round or flat and the type of traffic that will be using it.

The most aggressive of the steel cattle guards are made with round top pipes and provide a substantial physical livestock barrier. Its curved surface provides the least stable footing possible so your cattle can’t find a balanced or sturdy place to put their weight. The hoof will rock forward or backward and give the most uncomfortable footing possible that’s almost impossible to balance on.

Even if one of your animals does attempt to try a step on the top rail, the experience of the unsettling instability will make them turn the other way and they won’t bother to test it again. The inability to find stable footing on a round pipe is the most effective physical deterrent besides a gate.

Both round and flat pipe cattle guards provide a visual deterrent in addition to their physical barrier. They are traditionally mounted on concrete footings like a bridge which creates an open vaulted area underneath.  The drop under the top rails provides a visual cue of depth that in itself, can prevent cattle from attempting to cross.

There have been studies done with visual illusions painted on flat asphalt that resulted in cattle turning away even though the surface was perfectly flat. Researchers painted the illusion of pipes and a corresponding shadow to create the illusion of depth. When the cattle were exposed to the artwork, they assumed it was unstable and elevated and did not attempt to cross.

This optical trick worked for a limited amount of time but eventually did break down after a few days as one of the cattle (the bravest apparently) did place a hoof on it and eventually crossed. The others soon followed and the illusion barrier on its own was defeated.

Barn World offers round pipe cattle guards that have the option of being permanently boxed, an option for laying directly on the ground, or with a removable box for cleaning underneath.

A steel skirt welded around the exterior may be placed directly on the ground. The permanent box keeps dirt from creeping when used without a foundation. It does not bear any weight and is only there to prevent dirt from creeping underneath. The design is simply laid on the ground with a dirt ramp up on either side for vehicle crossings. It’s very popular for low-traffic areas and use in construction sites as wash-outs and rumble strips. It can be used to clean construction equipment before going out on a public roadway.

The standalone box stays in the ground so you can lift the guard and clean it underneath.  The design keeps the surrounding area from being disturbed! It’s a nice feature that allows for a complete cleaning if you have the equipment to lift the guard.

The round pipe design is available in an economical private-use or highway rating. The HS20, public highway rating is 16 tons per axle and require for use in public roadway projects.

The flat pipe provides the benefit of allowing high-speed traffic to cross more smoothly than a round pipe design. The pipe is flat on top with a large space between each rail. This design is still very effective against hoofs but provides high-speed vehicles with a smoother ride. 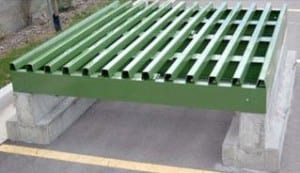 These cattle grids are also available to ship with precast concrete cattle guard foundations that can be lowered directly into the ground without the need for pouring concrete on-site. The foundations come with anchor bolts already poured into them. The grid may be bolted down to the concrete in the field. The precast foundations are useful in remote areas where concrete is not available.

Flat-top pipe guards are available in a wide variety of load ratings for all types of different projects:

Secure your livestock and provide easy access to pastures with the right cattle guards for your property. You don’t always need to open a closed gate to keep your animals secure!

For more information or help with planning, please let us know and we’ll be happy to help. Sales@BarnWorld.com or (720) 238-2190. Check out our Livestock Youtube Channel!