As the entire country is affected by the drought, the cost of feeding your livestock continues to rise.  It’s now more important then ever to minimize waste from feeding.

Barn World carries a large selection of hay feeders to minimize waste and provide increase profits. The Hay Hut hay feeder is a great horse hay feeder that is so easy to use and simple in design that feeding round bales to your animals is a cinch.

In addition to the actual hay/cost savings, the use of large bale hay significantly reduces Labor costs and this design helps minimize pasture stress in overstock situations and during poor forage growing conditions.

They also help stop ‘big bale bickering’ and can bring a strong air of calmness as if the horses all know that they have a constant source of protected hay.

The unit ships in two halves with simple build instructions and takes approximately 30 minutes to bolt together. They are very easy to move, manage, load and maintain

This feeder is a robust, durable, and UV stabilized covered hay feeder made of polyethylene and hence it cannot rust and does not require any maintenance unlike the majority of metal feeders.

The feeder measures a full 84 inches in depth so that it can accommodate the largest of round rolls now being produced in the USA and up to twenty conventional square bales! There’s also enough room for the majority of big square bales.

This large size and depth allows it to be easily pushed back over very large bales, even if they have been placed on a pallet, without catching the top lip of the feeder on the bale itself. 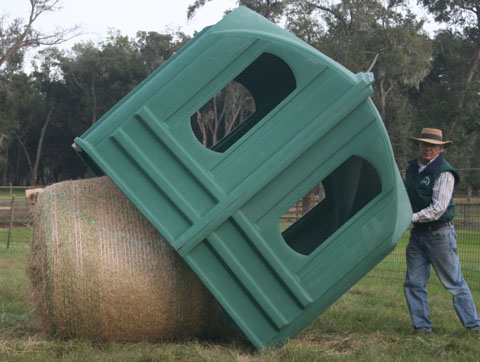 The 84 inches height allows for plenty of headroom for the use of a pallet while still allowing for good airflow and cooling over the top of the bale.

When un-assembled, it will fit in the back of pickup. The overall width of 72 inches allows up to three units (in six halves) to be transported easily in a standard bed pick-up truck (see photo). This configuration also helps reduce shipping costs.

It comes with simple build instructions and takes approximately 30 minutes to bolt together. They are very easy to move, manage, load and maintain and we have many testimonials to that effect. Supplied with all assembly hardware and a lifting eye for relocation purposes, it can be relocated by carrying or by simply carrying. Just see our video to see how easy it is to move.

Similar units of identical material from the same manufacturer that has been outdoors for  6 years in Missouri and are warrantied for an entire year. The feeder should provide at least 10 years of good service which is an outstanding return on investment.They are designed and manufactured to accommodate all sizes of round rolls up to 1600 lbs. We have incorporated bigger windows for larger horses and anchor points for windy conditions.

Below are just some of the happy customers:
Please contact us for more information or if you wish to provide a testimonial about how these covered hay feeders work for you.

Gottado Ranch, Ocala – April 2011
We purchased 2 Hay Huts at an equine event in Ocala, FL. They are easy to set up and use. As soon as we had them in the field the horses came over to check it out. They were eating out of it before we left. We had a really bad rainstorm about 3 days after we started using our Hay Huts. I went out after the storm to check the hay inside the huts. The hay was bone dry! The wind did not even blow rain in the windows. The horses love it and none of them fight. There is no manure or urine in the hay because the Hay Hut prevents this. This results in almost all of the hay in the Hay Hut is being used as food rather than bedding. Thank you Hay Hut for a great product that saves time and money. We plan on purchasing another Hay Hut before next winter.

January 2011
Thank you so much
for your courtesy and help as I decided whether or not to buy your Hayhuts product, for Potomac Glen Riding School . Since we have four paddocks at Potomac Glen, each containing 5 to 7 horses, we needed at least four Hayhuts, and I was initially very concerned about what I thought might be an expensive investment.

I am very pleased
to report that the four Hayhuts I purchased have exceeded my wildest hopes of better hay usage & economy. Without a doubt, the Hayhuts have halved my round bale usage in just the last few months, thereby cutting my hay costs substantially. The Hayhuts have eliminated hay waste by keeping the horses from sleeping & defecating on the round bale hay. They also keep the ice, snow and rain off the round bales so I no longer lose a lot of hay. The Hayhuts have also eliminated the typical wasted mound of unusable hay, and the horses eat all of the round bale hay and leave only dust. My quality if life has improved because, in addition to saving on my round bale hay costs, I have also cut my work load substantially by feeding the bales to my horses only once a week, instead of two times a week, and the paddock clean up is virtually non-existent! Thank you again for your Hayhuts. When finances permit, I will be adding two more Hayhuts to the riding school. I will be happy to talk to anyone who is interested in Hayhuts. They can contact me at (301) 601-0622, and I will be happy to tell them about my experiences and to heartily recommend Hayhuts!
Susan Hansen Potomac Glen Riding School

January 2011
Eliminates almost all waste!
Just a note to tell you I don’t think you were totally truthful with me when we talked about the hay hut: you said I could probably reduce hay waste by about 30%… well I have now fed two round bales out of the hut and am COMPLETELY CONVINCED waste is almost totally non existent! I watch the horses eat every day at some time or other and it seems when they do drag a mouthful out of the hut and drop it, that before they stick their heads back in they almost always pick up what they have dropped and eat it first. If there is a mouthful laying on the ground when they first walk up to the hut they usually pick it up and eat it first! They have developed really good “table” manners. I would bet out of the two bales fed so far, not even three (YES 3!) pounds of hay has been wasted and when it has snowed it was totally protected. The price initially, did seem high but with the price of hay it will pay for itself in very short order, well worth the investment for sure! Thanks for delivering and helping me get started assembling it and Thanks for a GREAT product!

AUGUST 21st 2010
Working out well!
The horses love it. Little to no waste on the hay. The hay stays dry, and no fussing. We did learn to set the hay on end instead of the side, as on the side they were able to peal layers off and out. Not so when it’s sitting on end. Carole (Missouri)

A letter from Pennsylvania

We wanted to drop you a note and let you know how satisfied we are with your product. We purchased three units from you in July ’09. The units were assembled and put in the pastures once we received them. We started feeding hay on and off from October until December. Starting in December we began feeding full-time from the feeders.

Our hay usage has shown a dramatic decrease. We do not see the large hay/manure piles that we routinely had using conventional round bale feeders. By this time each winter I am usually looking for sources of hay; our barn still has enough to last us for another two months. We have the largest number of horses that we ever have had on the farm, we have used less hay than we used to with fewer animals. We have fed small square bales, large round bales and large square bales in the feeders: they handle all of these varieties without any problems at all.

We are feeding animals in a variety of sizes and breeds. They all readily use the feeders without any problems. We are feeding our foals, yearlings, broodmares, miniature donkeys and a large Thoroughbred and Irish Sport horse on these feeders. We have three pastures running at the present time, one feeder has five horses on it, one has ten broodmares and the other has six geldings and two donkeys.

Assembly of the units was easy and took only around 20 minutes per hut. The green color blends in well with our fields and makes the huts easy to find in snow drifts, lol. Ordering and delivery were easy and I believe we will easily recover the cost of the units by the end of this year or the beginning of next. The amount of hay saved and a decrease in wasted hay/manure mixed is unbelievable.

We would highly recommend your product to anyone feeding horses round bales of hay or even small bales. The quality of the huts, the cost, the performance and your customer service have made purchasing and using these units a pleasure.

Thank you, The Hillards Pat and Kathy Hillard

City of Houston Mounted Patrol
They are everything they say they are and more. We’ve had 4 for over 5 months now and have already recognized a savings with less waste. All 38 Police Horses love the them as there is always fresh clean hay available to them when they are turned out. There is no fighting over the hay and no injuries. We have all sizes and breeds of horses at the Houston Mounted Patrol and all of them love them. They prove the simplest designs are usually the best. Our horses thank you for making such a great product!” – Sgt. Leslie Wills, Houston Mounted Patrol

Road to the Horse Chris Cox uses these feeders to save and preserve the hay. They keep the hay weather protected and are horse friendly.” – Chris Cox

Nebraska Blizzard
Hay Feeders for Horses
Hi Denis, Just thought I’d let you know the Hayhuts made it through their first Nebraska blizzard just fine! I thought I may find them either full of snow or blown across my feeding area, but, neither was the case. They stayed in place, no snow was inside and the horses had plenty to eat all through the storm! – Mary Anne G. – Nebraska From using one round bale every 3-3 1/2 days to every 5-5 1/2 days I have been using the feeders for not quite a year now. I was about done with round bales before I found these. The horses would waste so much. We had one paddock where we were feeding 1 round bale every 3 to 3 1/2 days. When we started using them, it went to 5, 5 1/2 days sometimes even 6 days. I am now using 1/2 a feeder (one section) in a shed and another on the fence line. We throw small square bales or flakes of hay. There is no waste doing that. When you feed alfalfa to the babies they do not stand on it any more. They love their hay hut. If you ever use one you will not let it go. What a great invention.
– Karen Bruce, Irish Oaks Farm

Be sure to feed smart this summer and receive the economical benefits and ease of use the Horse Hut Hay Feeder offers.

Also visit Barn World today for all of your livestock supplies needs.  We also carry a large selection of cattle guards, hay feeders, grain bins and even 5 Star saddle pads.