Cattle guards offer ease of access to your livestock pastures, farm and ranches while keeping your animals safe from wandering. The simple design allows vehicles to pass through a fence line holding most ranch animals without having to stop and open, then close a gate. If you have through traffic or other people working on your farm, you never have to worry about an open gate in the middle of the night.

Take a look at some of the more common options to find the fit that’s right for your crossing.

Barn World offers each of the cattle guard types below with either round pipe or flat pipe on top. The top pipe runs perpendicular to the direction of vehicular traffic and rests directly on the c-channel or i-beams underneath. The weight of the vehicle is transferred from the pipe, to the beams and then to the ground.

is ideal for areas of high speed traffic such as public roadways and other crossings with a lot of traffic moving at a faster clip. The finish allows for a more smooth transition of the barrier with the least amount of ride disruption to the passengers and vehicle. They can commonly be seen in use by state & federal highway projects.

are of the same design as the flat pipe and come in 3-1/2 or 4-1/2 diameters.  The round pipe causes a bit more vibration on passing vehicles,  but is seen as a more effective deterrent to livestock.   The curvature of the pipe creates less of a balancing surface for hoofed animals creating more discomfort on the foot and leg if stepped on.  It is very difficult for hoofed animals (goats excepted) to get a secure footing feeling while balancing all of their weight on such a small, rounded surface. 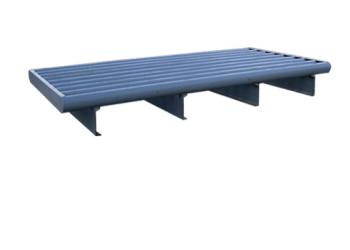 A study was done comparing the effectiveness of traditional round pipe cattle guards to white lines of roughly the same width painted on a black road surface to create the illusion of depth. The painted lines were found initially to be surprisingly more effective than first thought. When cattle were introduced to the markings, they we not interested in testing the barrier, but when they had had some time to inspect the painted surface, the eventually were able to overcome their initially hesitation and cross without effort.  Once they were able to determine the road was indeed flat, they did in fact cross easily. The optical illusion of a barrier did deter them for a time, but when there was a incentive to cross it, they did. The researchers found that they still preferred to go around the markings, but didn’t have a problem crossing once the ‘jig was up’.

Round Steel Rails are Effective

The traditional round top rail cattle guard, couples the optical deterrent with the physical to provide the most effective obstruction. Livestock that are motivate to attempt a crossing and are brave enough to place a hoof on the guard quickly discover that the footing is unbearably unstable and will usually withdraw their hoof.  After that initial uncomfortable encounter with the steel round pipe, they will typically avoid it at all costs.

We have had reports of some aggressive or spooked bulls attempt to jump over the obstacle.  This is usually done in times of panic and some of the larger more athletic bulls can jump six feet or more on occasion.  For these more muscular and nimble ‘jumpers’ and eight foot (in the direction of travel) cattle guard has proved to be more than enough to show the animal that it’s a barrier not to be contemplated.

Of special note, even round topped guards do not work with all animals. Smaller hoofed farm and ranch livestock such as goats and some sheep can be very nimble and often have no trouble tip-toeing through. Animals with soft pads on their feet are able to balance on the round piping and although not a comfortable footing, they are able to walk across if they desire. 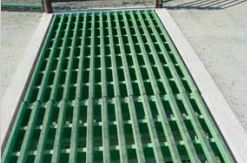 A second option available in the selection of cattle guards is the boxed vs. the traditional vaulted that requires a footing to rest on. The boxed is designed to lay directly on the ground in low traffic areas without a concrete foundation. 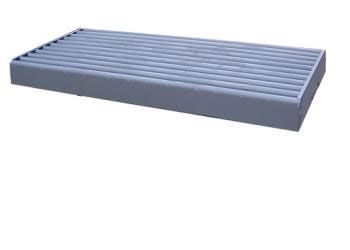 Boxed guards have a steel skirt surrounding it. The skirt may be either welded into place or be removable.  The integral box is a steel skirt welded directly on that creates a barrier for dirt to creep underneath. With this type of box, installation may be made directly on the ground without the need of footings or digging. To clean out any debris that may have built up over time, it is simply drug out of place and then slid right back in.  At near 12 inches tall, dirt ramps are built up on either side to allow vehicles to cross over.

This type of installation is considered less permanent and is very popular in low traffic areas and construction sites needing an equipment washout area or a dirt rumble to clean vehicles before they enter a pubic roadway. They are also more ‘portable’ and may be move from job site to job site if necessary.

is done with a concrete foundation (although other materials are also used; for example railroad ties) and a ‘vault’ area is dug underneath to collect debris. Typically, a rectangular concrete foundation is poured to keep the dirt walls from falling in and to provide support to the beams that run in the direction of traffic.  Although not considered a difficult endeavor, an experienced contractor who is familiar with the local soil conditions and frost / freeze levels is highly recommended. If not properly supported, changes to the soil during freezing, water saturation or runoff may affect the structural integrity of the crossing and the cattle guard itself. 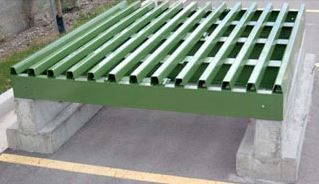 There is also a cattle guard specifically designed for ATV use in crossing fence-lines.  We’ve custom built these for golf carts passage as well. Simply cut whole in your fence-line and drop this guard into place. One you connect your fencing the vertical supports in the middle, you’re done. That’s all that’s needed! 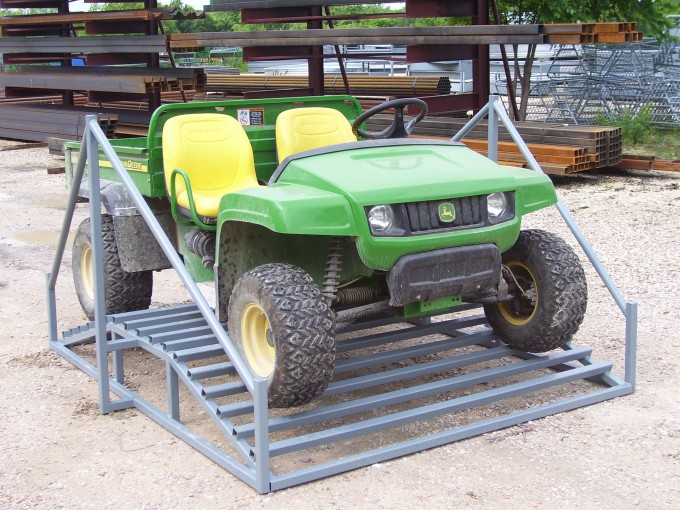 Another alternative to traditional cattle guards.  These gates pivot and allow the it to lay flat for a vehicle to safely cross over and then return to their upright position automatically.  This type of gate has been successfully used in busy feed lots with lots of tractor and truck traffic and provides yet another secure means of keeping livestock in place while allowing access to busy areas. 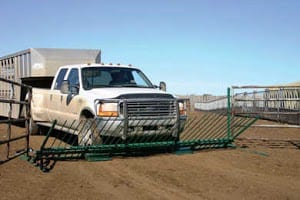 The American Association of State Highway Transportation Officials or AASHTO, supplies maximum load ratings necessary for highway bridges and all crossings that support traffic. The common load design specifications are shown in the table below:

These ratings are used by engineers who issue certificates of design reports and certify builders to ensure the product meets the load requirements for the ratings used above. To achieve the designation, manufacturers must use specific welding techniques, materials and designs before the guard can be certified and used in a public roadway.  For most highway crossings, the 16 ton per axle or H-20 rating is used.

All cattle guards sold by Barn World are built to withstand fully loaded semi-trucks and large farm equipment. They are very popular with traditional farm and ranch operations.

Note that we do offer and alternative to steel: concrete cattle guards forms. These poly forms create a livestock barrier that won’t allow a hoof to slide down between steel rails. They taper together into a 2 inch base as shown below. 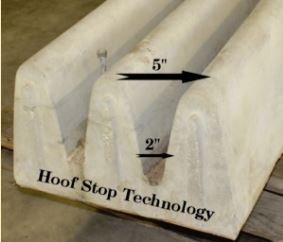 There are two different forms for use. One is set in the ground and left there after the pour. The other is a reusable form that allows you to pours as many as you like!  Click either picture below for more details.

Considered the most effective means of controlling and containing livestock on a farm and ranch. Theses crossing offer the ultimate ease of access for all types of vehicles. They create peace of mind and security no matter who needs to pass through a fence line.

For more information on our full line of farm and ranch supplies, or for any help with your livestock supplies, contact Barn World at 720.238.2190 or Sales@BarnWorld.com today!.